If you are looking for the latest legal information relating current Coronavirus laws in New Zealand, check out our Coronavirus and the Law section.

View all sections in this topic

What is a personal grievance?

A “personal grievance” is one of the main ways for workers to take a legal claim against their employer if they believe their employer has acted unfairly or unreasonably towards them.

There’s a particular process you must follow when you bring a personal grievance. You must first raise the issue with your employer within 90 days. Then, if you’re not satisfied with their response, a free mediation service is available. If mediation doesn’t work, you can take your grievance to the Employment Relations Authority. See “Raising a personal grievance: The process” in this section.

On what grounds can I bring a personal grievance?

The personal grievance process is available only for a specific set of grounds:

These grounds are explained in detail in the following sections of this chapter.

Taking a personal grievance if you’re on a work visa

If you’re in New Zealand on a work visa that’s dependent on you having a job, and you’re then legitimately dismissed, you’re legally required to leave the country.

However, if you believe you were dismissed unjustifiably, you should get legal help. You should also consider telling Immigration New Zealand – they may grant you a temporary visa or decide to change the conditions on your existing visa to allow you to stay in New Zealand while you take the personal grievance. However, having a legitimate personal grievance is no guarantee that Immigration New Zealand will change your visa or visa conditions to allow you to stay in the country.

Note: If you plan to bring a personal grievance, it’s important that you deal with the issue of your visa early on. If your current visa expires, you’ll then be in New Zealand unlawfully and this will restrict your ability to apply for future visas.

If a migrant employee has been treated particularly poorly by an employer, then Immigration New Zealand may be interested in prosecuting that employer (see the chapter “Starting and leaving a job”, under “Migrants and other vulnerable workers”).

What is triangular employment?

Triangular employment is where you’re employed by one employer but you spend your day working directly for someone else – for example you’re employed by a labour hire company but work day-to-day for another company on a building site. This can be a short-term or long-term arrangement. 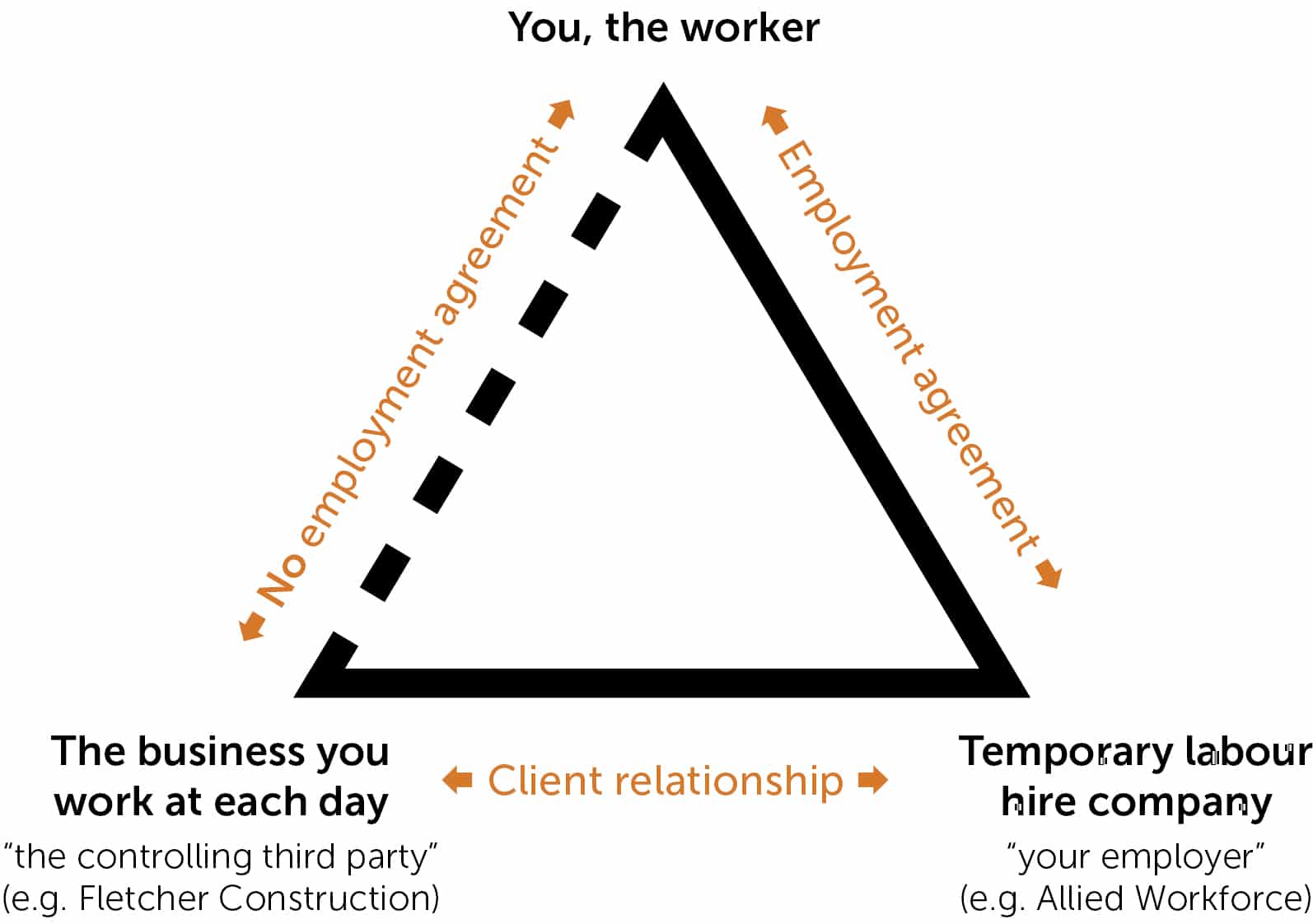 You must tell the controlling third party within 90 days after the action or incident that you believe they caused or contributed to the grievance. Your employer can also apply to have that third party joined to your personal grievance claim and the third party can also agree to be joined after the 90 day period. Mediation is available to all three sides involved.

If the Employment Relations Authority decides that the labour hire company and the controlling third party share responsibility for what happened, it can order that they both pay compensation and in proportions that reflect each one’s level of responsibility.

Next Section | Raising a personal grievance: The process
back to top

Check out Frequently Asked Questions and Answers related to COVID-19 on our website here.

Community Law Centres across Aotearoa are operating remotely. Please contact them via the phone number or email displayed on the Centre’s page.